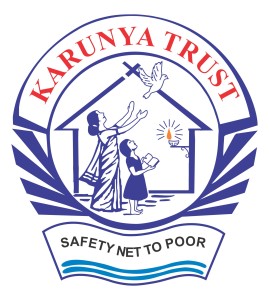 “To create a just and harmonious society based on the Gospel Values of love, fellowship, freedom and peace”.

Karunya Trust will restore human dignity of the needy and the marginalized by addressing the issues of Education, Health, Livelihood, Governance and Environment. It will facilitate the process of empowerment by enhancing their capacities, promote networking with people’s organizations, likeminded NGO’s. It will promote development process by mobilizing the potentials and resources available within and outside the communities.

MILESTONES IN THE HISTORY OF KALYAN DIOCESAN SOCIAL ACTION (KDSA), KARUNYA TRUST SINCE 1998

Projects in Progress & implemented: Karunya has been implementing the following programs in the target areas with different stakeholders:

Thanks for being a part of this divine movement…

2012: Kunda, Shubham SHG’s food stall was selected as the best food stall at Mahalakshmi Saras at Bandra and won Price money of Rs.15,000/-

2011: Six SHGS were awarded as the best SHGs by Kalyan Samaj Vibhag, Kalyan.

2009: Two of our SHG’s from Ambernath & Bhiwandi won 1st & 2nd prizes at District and Konkan region.

2008: Best NGO AWARD – Karunya was awarded as the BEST NGO in Powai area by the MANCH Mumbai Citizens during the Powai Festival.