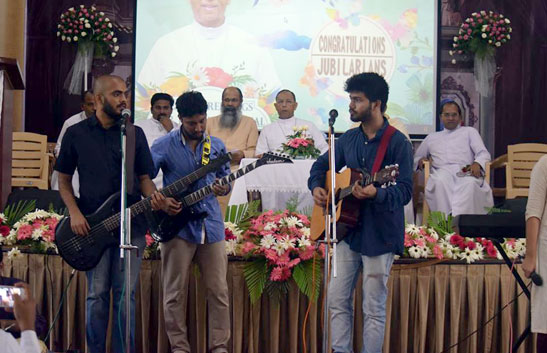 Days before leaving to Poland, they have launched their prestigious album: Faith Hope and Love, consisting of 8 songs. These songs are specifically written in connection with the Year of Mercy and the World Youth Day in Krakow. The album starts with the first song; “Praises be..” and the last song is, “Door of Mercy..”. These melodies and divine songs takes each one to a heavenly mood and offer peace of mind. These little pieces of heavenly songs are capable of inspiring millions.

KEY Band is the diocesan youth band of the Diocese of Kalyan, situated in Maharashtra, India. The process for the formation of this band had started by the Kalyan Eparchy Youth (KEY) in the year of 2008. By keeping diocesan level KEY Band competition, for a half decade, a qualitative screening has been done to get the best members into the band. In 2012 the 15 member musicians team, coming from different walks of life, was formed to provide a platform for young musicians to glorify God through music. Their coming together and performing at more than 50 stages in the last 4 years have made the KEY Band to be one of the qualitative bands in the Catholic circle.