Kalyan Pithruvedi, an active and main stream association of the Eparchy will hold its AGM (Annual General Meeting) on 19th June at the St. Joseph’s Church, Powai. The day and event will be beautified with the Extempore speech competition in two languages: Malayalam and English. 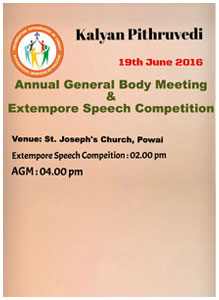 This AGM is important in many ways. This is the first AGM, which will be conducted under the leadership of newly appointed director, Fr. Shibu Pulickal and asst. Director Fr. Jomet Vazhayil. Kalyan Pithruvedi is constituted on the slogan: Celebrating Fatherhood in Christ. Today it encourages married men to be better fathers leading exemplary family lives.

The event will commence with an Extempore speech competition. The competition is expected to receive more than usual entries, since, it is being held in English and Malayalam categories for the first time. The competition will be followed by the AGM and all newly elected parish executives are invited to participate. The event will conclude with the election of office bearers of Kalyan Pithruvedi for the year 2016-2018.